Note: In this series, I've pulled information from various providers. These came from Wikipedia.

Tasty Things - 2 Kill You - I write fantasy and that gives me license to make up stuff. That's not always a good practice. It's best to have kernels of truth in even fantasy work the reader can identify with having seen or heard of in passing. Some of these poisons come from exotic parts of the world, but there is always a way to work them into your story, i.e., the nice little man at the corner apothecary. So, fantasy or non fantasy, see if some of these can flavor your story.

Cerbera odollam (commonly known as the suicide tree). The seeds contain cerberin, a potent toxin related to digoxin. The poison blocks the calcium ion channels in heart muscle, causing disruption of the heart beat. This is typically fatal and can result from ingesting a single seed. and its taste can be masked with strong spices, such as a curry. It is often used in homicide and suicide in India; Kerala's suicide rate is about three times the Indian average. Now, you know there are a lot of Indian spice shops around the world!

Digitalis purpurea(commonly known as foxglove). The leaves, seeds, and flowers are poisonous, containing cardiac or other steroid glycosides. These cause irregular heartbeat, general digestive upset, and confusion. Can be fatal. You might need lots of tea for this one!

Ricinus communis (commonly known as castor oil plant or Palma Christi). The seeds contain ricin, an extremely toxic water-soluble protein. Also present are ricinine, an alkaloid, and an irritant oil. According to the 2007 edition of the Guinness Book of World Records, this plant is the most poisonous in the world. The lethal dose in adults is considered to be 4 to 8 seeds, but reports of actual poisoning are relatively rare. If ingested, symptoms may be delayed by up to 36 hours but commonly begin within 2–4 hours. These include a burning sensation in mouth and throat, abdominal pain, purging and bloody diarrhea. Within several days there is severe dehydration, a drop in blood pressure and a decrease in urine. Unless treated, death can be expected to occur within 3–5 days; if victims have not succumbed after this time, they often recover. Toxicity varies among animal species: 4 seeds will kill a rabbit, 5 a sheep, 6 an ox or horse, 7 a pig, and 11 a dog. Poisoning occurs when animals ingest broken seeds or break the seed by chewing; intact seeds may pass through the digestive tract without releasing the toxin. Ducks have shown substantial resistance to the seeds: it takes an average of 80 to kill them. Gee, mama, do I have to drink that; it's yucky! 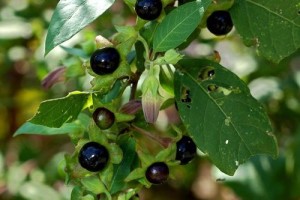